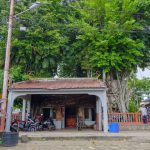 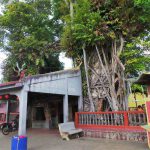 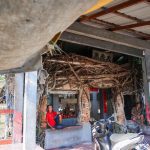 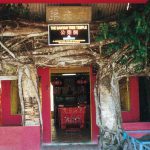 Witness the power of Mother Nature at the Banyan Tree Temple of Senggarang Village where ancient trees entwine their roots around, enveloping the ancient walls of the building in protective embrace. The result is a fascinating and formidable structure that makes an ideal photography subject.

There are many stories concerning the origins of the site which was built in 1811. Its signboard reads “大夫第”, referring to residences of high-ranking government government officers called “Kapitan”. Some believe it was the home of deified Kapitan Cina Tan Nguang Ga (陈源教) who was the village head and a good Samaritan that helped the needy during his retirement.

According to the villagers, it was once a grand, two-storey structure. After the house was desolated,  it dilapidated and would have long collapsed if not for the banyan trees’ support.

Surrounded by the remnants of the old walls, the altar sits in the newer concrete area built with funds donated from a Medan Chinese businessman who allegedly struck lucky after praying at the temple. The site now serves as a village shrine with the main deity being the Kapitan whose ancestral tablet is positioned in the centre. Flanking the sides are two unnamed community tablets for locals who have passed away without descendants, and for individuals who have contributed greatly to Senggarang Village.

During the seventh lunar month, descendents of the Kapitan still visit this ancestral home while other frequent visitors include those attracted by its divine efficacy.

25 Things To Do In Bintan Rather Than Lepaking At Resorts

Here’s Why Bintan is a Shutterbug’s Delight

How to Spend 72 Fun-Filled Hours in Bintan

Bintan Off The Beaten Path: 8 Things to Do for an Exceptional Getaway

6 Ways to Enjoy a Romantic Getaway in Bintan

Here’s Why Bintan Resorts Is Perfect For Your Next Beach Holiday!

Sail Away To A Kid-Friendly Island Holiday in Bintan Resorts!

How to Enjoy a Perfect Day at Bintan Resorts, Plaza Lagoi

4 Ways to Have a Fun-Filled Family Holiday in Bintan

Here’s Where You Can Find Bintan’s Best Eats!

Hook On!!! Seafood Grill and Bar

There’s Something for Everyone at Bintan Resorts

7 Reasons Why Bintan Is a Hot Spot for Nature Lovers

5 Bintan Wedding Venues With A View

8 Local Must-eats on Your Next Visit to Bintan

Your Guide to Having a Wet and Wild Time in Bintan

5 Traits of a Good Travel Companion

4 Fun Ways to Soak Up Summer at Bintan Resorts